From the moment of its discovery in 1844, the François Vase was recognized as an extraordinary work of art, unlike any other vase of its kind: a judgment that still holds true today, when the corpus of known Greek vases is perhaps a hundredfold what it was in the mid-19th century. The earliest reports speak of the vase’s impressive size, the number and complexity of the figured scenes, the astonishing number of inscriptions, and the uniformly high quality and precision of the draughtsmanship. Even the nickname ‘François Vase’ was applied in the earliest publications, and it remains to this day the only Greek vase to carry the name of its excavator.

The clay vase, made in Athens, ca. 570–560 B.C.E., a collaboration between the potter Ergotimos and the painter Kleitias, was exported to Etruria and placed in the grave of an Etruscan prince near Chiusi. It was excavated by Alessandro François in a tumulus and is today exhibited at the Museo Archeologico Nazionale in Florence. Inv. no. 4209, height 66.0 cm. Beazley, ABV 76,1; Beazley Archive no. 300000; AVI no. 3576.

This is the first complete photographic documentation of the vase since its discovery, coordinated by Mario Iozzo and made by Fernando Guerrini of the ­Soprintendenza per i Beni Archeologici della Toscana. The photographs have been especially adapted for publication through computer editing and include not only complete overviews but also many details in enlargement as well as the drawings by Karl Reichhold (1899) as references. 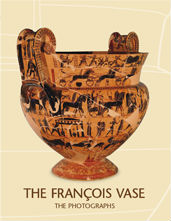